Together with the Max Planck Institute for Extraterrestrial Physics, DIOPTIC has developed a method to locate the position of optical elements in space with sub-micron accuracy.

This technology has now been successfully used to align the optical lenses of the new Euclid space telescope. The method is based on a computer-generated hologram (CGH) with several zones. Each zone specifically targets the laser light of a Fizeau interferometer for each lens element to be aligned. The alignment is done by optimizing the interference signal.

With this novel method of interferometric precision alignment, optical systems can be aligned with an accuracy of a few µm. Using the multi-zone CGHs calculated individually for each system, the individual components of lens systems and reflecting telescopes can be aligned relative to each other with pinpoint accuracy. Even systems whose detection spectrum lies far beyond the visible light (e.g. radio telescopes) or whose operating conditions cannot be easily reproduced during production (e.g. temperature in space telescopes) can be aligned to a known nominal position without feedback of the total system performance.

The secret of this method is that the target position and orientation is stored in the subholograms. Since it is not necessary to generate a good image as an alignment criterion with this technology, thermal expansion and even lens groups that have not yet been installed can be compensated. 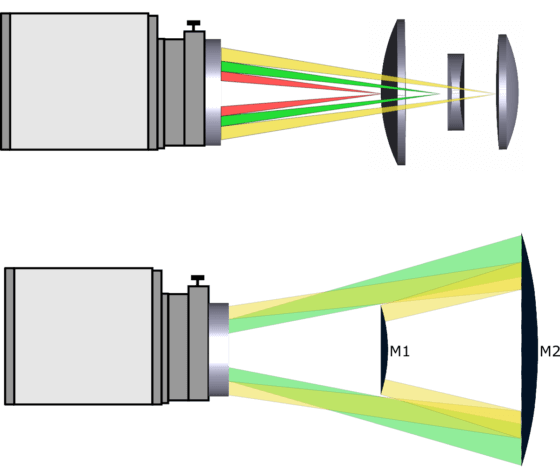 In an interferometric alignment of a lens, corresponding CGH zones are specifically designed for each lens surface. If a lens is at the correct position and in the correct orientation, an interference pattern is generated by the corresponding CGH zone. By optimizing the interference signal, the lens can be precisely aligned in position and tilt. The same method has already been successfully applied to mirror telescope systems.
For each optical element to be aligned, at least one diffractive sub-zone is provided on the substrate. Since the zones for all lenses are manufactured with sub-µm accuracy on a substrate, an optimal relative positioning of all components is guaranteed. 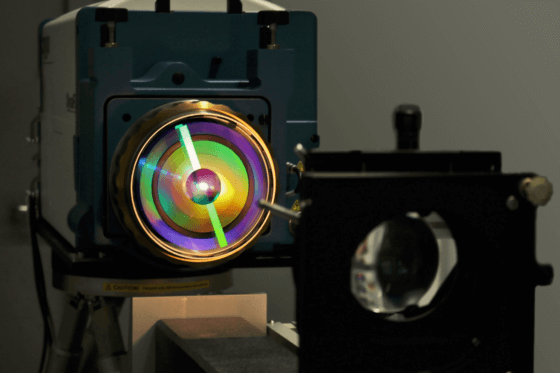 The principle of interferometric precision alignment was successfully applied in the production of the telescope lens for the Euclid Space Mission. With the multi-zone CGH shown here, the five lenses of the telescope could be aligned with a positioning accuracy of better than 2.5µm and a tilt of less than 10 angular seconds. Multiple measurements showed that the optical axis defined with the CGH falls below an accuracy of 200 nm. (publication)
The alignment was made at room temperature, where the lens does not produce a sharp image. This only occurs when the operating temperature of -140°C is reached. It is therefore not possible to optimize the imaging performance during lens assembly. With the help of the multi-zone alignment CGH, the nominal position of each individual lens can be aligned to micrometer accuracy at room temperature, taking into account the thermal expansion. This guarantees the best possible imaging of the stars under space conditions. 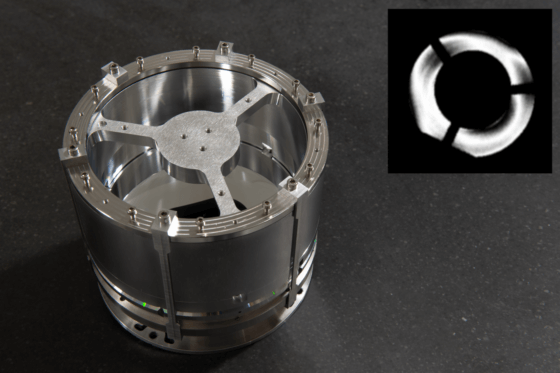 For the operation of the Wendelstein 7-X fusion plant, the so-called divertor plates must be continuously monitored for temperature. During operation, these plates are exposed to an enormous heat flow of around 10 megawatts per square meter and must therefore be cooled. In a future fusion power plant, the thermal energy dissipated via the divertor is then to be converted into electrical energy. An endoscope is used to measure the temperature of the divertor plates over the entire surface. The heart of the endoscope consists of a pair of mirrors that form a telescope. DIOPTIC has developed and manufactured several CGHs specifically for the characterization of this telescope system. They allow not only a highly precise inspection of the mirror shapes but also their alignment to each other. This guarantees an optimal image quality of the monitoring unit during operation.