Computer-generated holograms (CGHs) extend the capabilities of your interferometer to inspect surfaces of virtually any geometry. A CGH converts the plane wave emitted by the interferometer into an aspherical wavefront that is individually adapted to the test surface. After reflection on the surface and a second pass through the CGH, this wave is converted back into a plane wave. Minimal deviations of the surface shape can thus be detected as deviation in the interferometer image. A large variety of surface types can be inspected in this way, such as on-axis and off-axis aspheres, cylinders and freeform surfaces. The typical measurement accuracy achieved with DIOPTIC CGHs is λ/10 – λ/20 (PV).
Numerous additional structures on the hologram support you in adjusting the components for a fast measuring process and an optimal result.

For a surface inspection with CGHs, so-called Diffractive Null Lenses (DNL, also known as CGH Nulls) or Diffractive Fizeau Zero Lenses (DFNL) can be used. Which measuring method is most suitable for a given surface is individually tested and recommended by our experts. DFNLs are preferred for lenses with a low curvature, whereas surfaces with a strong curvature are often tested with a DNL.

DFNL: Compatible with all Fizeau interferometers

In contrast to conventional CGH Nulls, DIOPTIC DFNLs are manufactured on fused silica precision substrates with a flatness of lambda/10 (PV) or better. Since these substrates also provide the reference surface for the interferometer, a highly accurate reference wavefront is generated. The mechanical stability is guaranteed up to a diameter of 230 mm or 9 inch by appropriate substrate thicknesses of up to 24 mm.

The simple measurement setup when using DFNL CGHs allows fast and precise inspection of aspherical surfaces, cylinders and freeform surfaces. Since a DFNL CGH is attached directly to the Fizeau interferometer, no additional CGH adjustment mechanism is required. Auxiliary holograms to align CGHs with the interferometer objective are also not required. So-called alignment or fiducial holograms are individually designed to match the measuring surface. They enable the setup, especially of freeform surfaces, in the shortest possible time.

The CGH surface, which generates the aspherical wavefront, also functions as reference surface for the interferometer. With conventional CGH Nulls, transmission wavefront errors of the substrate are directly reflected in the measurement result. DFNL CGHs do not show this measurement error due to their principle. DIOPTIC guarantees a wavefront error of the reference surface of less than lambda/10 for all DFNL CGHs. On request, values < lambda/20 can also be achieved.

Surfaces that cannot be inspected with a DFNL due to their strong curvature can usually be inspected with a combination of a computer-generated hologram and a transmission sphere. In this case not the plane wave of the interferometer is modulated, but a spherical wave generated by the interferometer objective, which already has a similar shape as the required aspherical wavefront. As with DFNLs, both concave and convex surfaces can be tested. 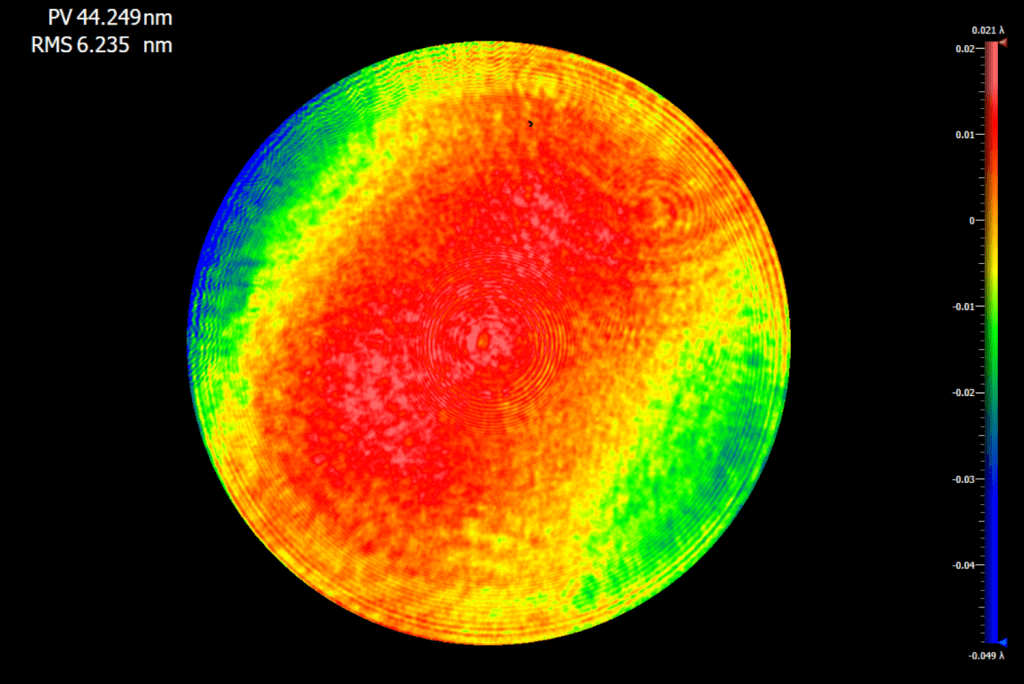 DFNL CGHs generate the reference wave of the interferometer on the same surface that generates the aspherical wavefront for the test object. This results in a very small influence of the substrate on the measurement result. The wavefront measurement of a spherical DFNL CGH shown here was calibrated by a random ball test and shows a systematic wavefront error of 6.2nm rms. This is also a value we typically achieve for testing aspheres. 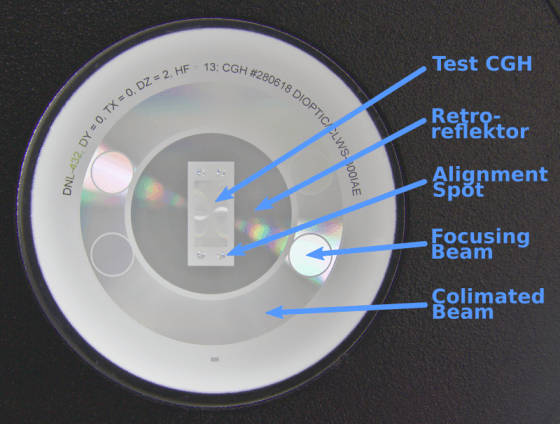 The measurement accuracy and time of a surface inspection depends strongly on how easily the CGH can be adjusted relative to the interferometer and the test object. DIOPTIC CGHs are equipped with a variety of alignment aids to quickly achieve good alignment, which can then be fine-tuned by optimizing the wavefront error. The picture on the right shows a DNL for testing a free-form surface. With the attached auxiliary structures, the CGH can be easily set up to the interferometer and the correct position and orientation of the test object can be adjusted. The auxiliary structures are applied in the same production step as the test hologram. Thus, a sub-micron accuracy is achieved during production.
The decision which alignment structures are applied is made individually for each CGH and recommended by our experts. 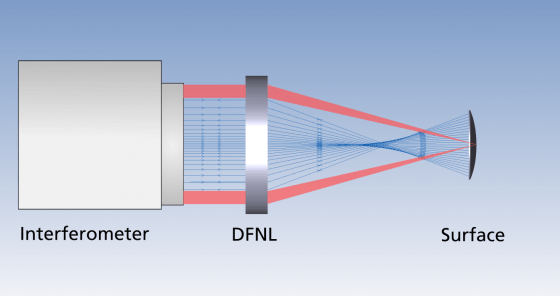 A cat-eye ring generates a spherical wavefront which is reflected back into itself when the center of the test object is exactly in the focus of the beam. The wavefront is generated with a diffractive ring, which is located on the substrate outside the actual test hologram. With the help of the interference pattern, the distance of the test object to the hologram can be adjusted with micrometer accuracy. 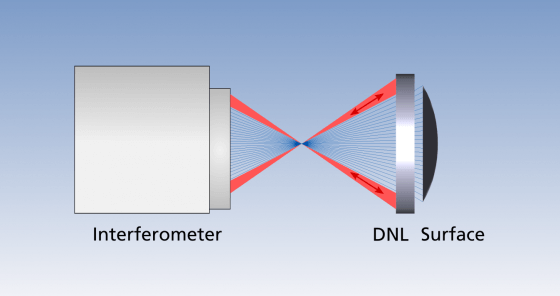 Retro reflector (only for DNL)

In order to enable the most exact possible alignment of a DNL to the transmission sphere of the interferometer, a retroreflector hologram is added. These diffractive structures outside the test hologram generate a spherical wave in reflection. With a perfect alignment between CGH and interferometer objective, the interferogram shows minimal aberrations. By minimizing the interference fringes, the CGH alignment can be performed. 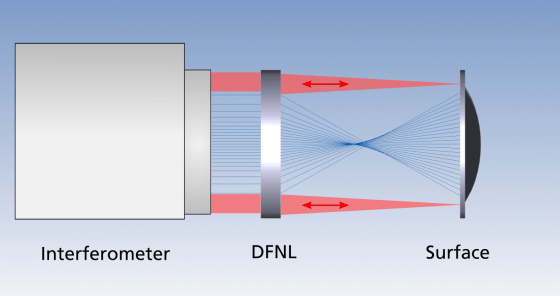 A very common option for adjustment are the so-called focusing beam holograms. These are diffractive lenses that generate a spherical wave with a defined focal point. On the test object outside of the test surface, corresponding markings, so-called fiducials, are applied which, if correctly oriented, correspond to the focus of the alignment spots. With at least 3 of these auxiliary holograms the position and tilt of the test object can be adjusted in all 6 axes.